We Have a Crush on Spain

Travelling in Jaén, Spain in October of 2019 during the olive harvest and olive oil pressing just amplified my appreciation for the hardworking farmers who make our liquid gold.

Driving in a small rental car through the country was challenging at times though. They do drive on the right, and correct, side of the road but there are some city streets in the country that are beyond challenging, like Toledo and Baeza, where the streets were so narrow and in between buildings that we had to pull the side mirrors into the side of car so that we could fit through! Those roads were like wide sidewalks jammed with tourists and locals. While that adventure had its allures, driving out on the open roads in the Linares region of southern Spain was absolutely inspiring. After leaving the gorgeous beaches of Valencia on Thanksgiving Monday we headed for our first stop we stayed in an olive oil farmhouse in Mancha Real. It was a two-story centuries-old house with the bare necessities and no wi-fi but surrounded by acres and acres of olive trees. In fact, we had to drive several kilometres through the olive trees on dirt “roads” to get there. Thank goodness for GPS! The rental proved to be very well located for a day trip to one of our Olive Oil producers – Almazares Aguilar – in nearby Linares. We met up with Andres Aguilar who heads up production at the facility and is also one of the owners of this family-run mill. We spent an hour or so chatting with Andres, touring the olive farm and the immaculate production facility. Andres advised that not only do they produce award-winning olive oil from olives harvested on their land which has 300,000 olive trees, but they also use olives from other farms in the area and produce olive oil that they export to Italy and across Spain. A large portion of their best olive oil – the stuff that wins awards at competitions around the world – is exported to North America for sale in boutique olive oil shops like ours. He asked us to stick around for the afternoon as they would begin pressing the Picual olives to make the oil that we would be selling in our stores in the new year. 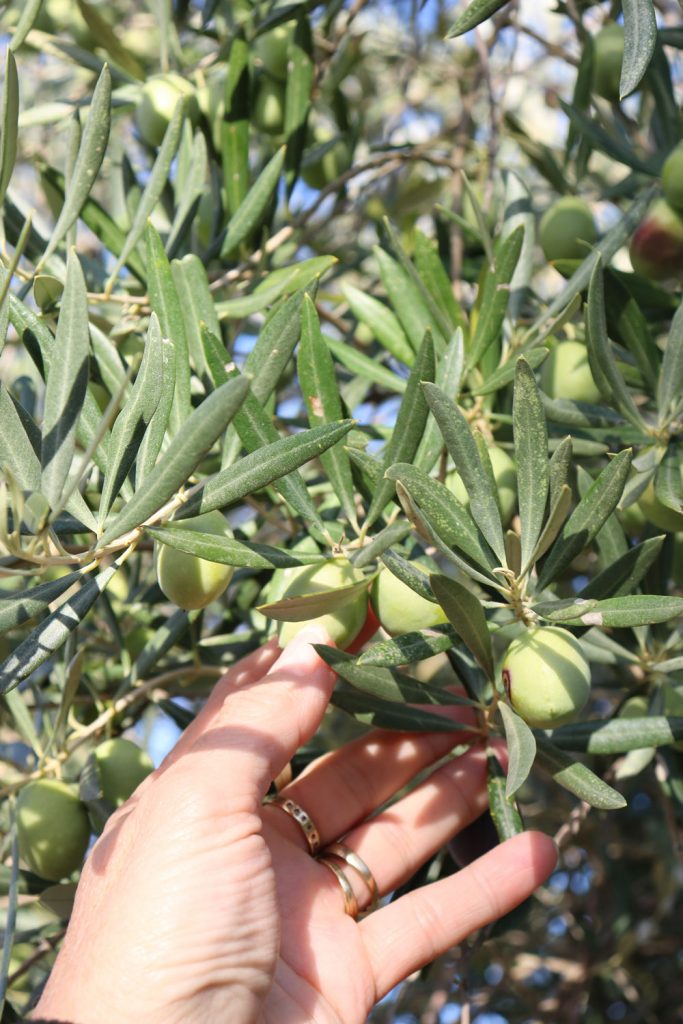 It was October 16, 2019 – a beautiful sunny day about 20 degrees with that perfect blue sky and barely a cloud in sight.
We watched the whole process – almost from start to finish – that afternoon. Workers walked out into the fields with nets and sticks. The sticks were used to hit the branches of the olives trees and the olives that fell dropped into a net at the bottom of the trees. That net was transported via ATV to the mill where they were poured into a trap door that led down to a conveyor belt. The olives were then classified as to type, gently washed and separated, by an air machine, from the branches, leaves and any other contaminants like rocks or gravel. Heavier contaminants sink in the water and lighter ones are blown away. The olives are then put on another conveyor belt and taken indoors to a horizontal malaxer, like a large food processor, where the olives are ground into a paste for about 20 minutes. The next step is for the paste to be “pressed” to extract the oil and this is done now by centrifugation and happens in several stages. At this point we were allowed to taste the unfiltered oil as it passed into holding tanks where a final separation happens through gravity and following that the oil would be filtered. Through the whole process staff were monitoring the temperatures and watching the process to ensure absolute quality. Later the oil would be sent for chemical and sensory analysis and that very oil would be transported to North America in large bladders. 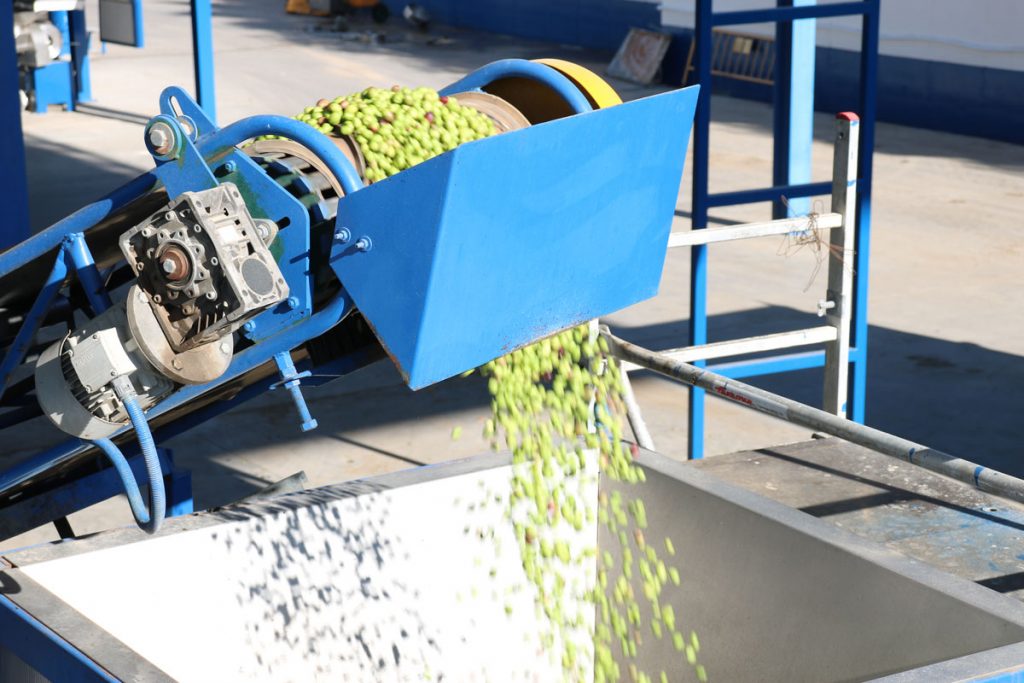 There are a couple of things I wanted to point out:
From the olives on the tree to the unfiltered oil we tasted, this was a process that took less than 2 hours. There were no olives in burlap sacks on the back of trucks or wagons or any olives sitting in nets on the ground for longer than the few minutes it took to knock them off the tree.

Lab technicians in white coats were present at every step of the process – monitoring temperatures, making notes! Tasting, taking samples and more. 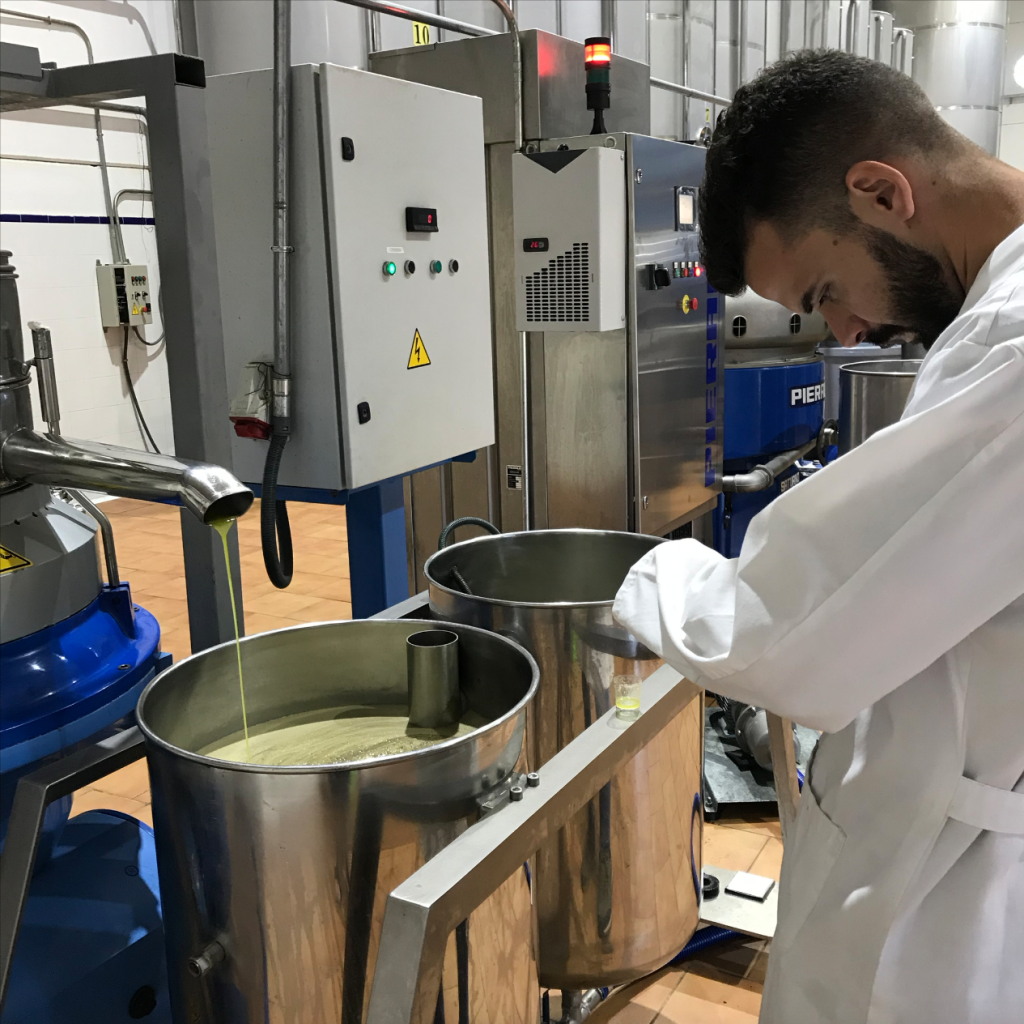 Around the grounds of the mill there were healthy lemon trees, flowers and herbs planted in proximity of the trees. The soil was dusty dry but clean and everything was brilliantly manicured. It was actually beautiful.

The waste contaminants – branches and leaves – were separated for use as animal feed and fertilizer.

The unfiltered oil we tasted was yellow-lime green in colour – not that colour has anything to do with quality – and tasted like fruit juice with a hint of lemon and herb and had a fresh and pleasant mouth-feel. It made our mouths tingle for a good 10 minutes. It was delicious, healthy and simply produced by crushing high quality fresh olives.

This is the Family Reserve Picual you can taste in our stores right now. From this producer we also currently have an Arbequina, a Gran Cru Cuvee and a Frantoio.