From the Global Cut-Flower Trade to Your Own Garden

Digging into the history of the rose, you’ll find a fascinating botanical and archaeological record. Among the stories of obsession and alchemy, one thing becomes abundantly clear: roses have proliferated and flourished in spite of (and because of) human beings. Apparently, we’ve always loved roses.

The oldest rose fossil was found in North America. A blog post from the University of Colorado (2019) indicates that “roses have been here a long time, for the oldest fossil, approximately 55 million years old, was found in the Florissant Fossil Beds, Colorado.” 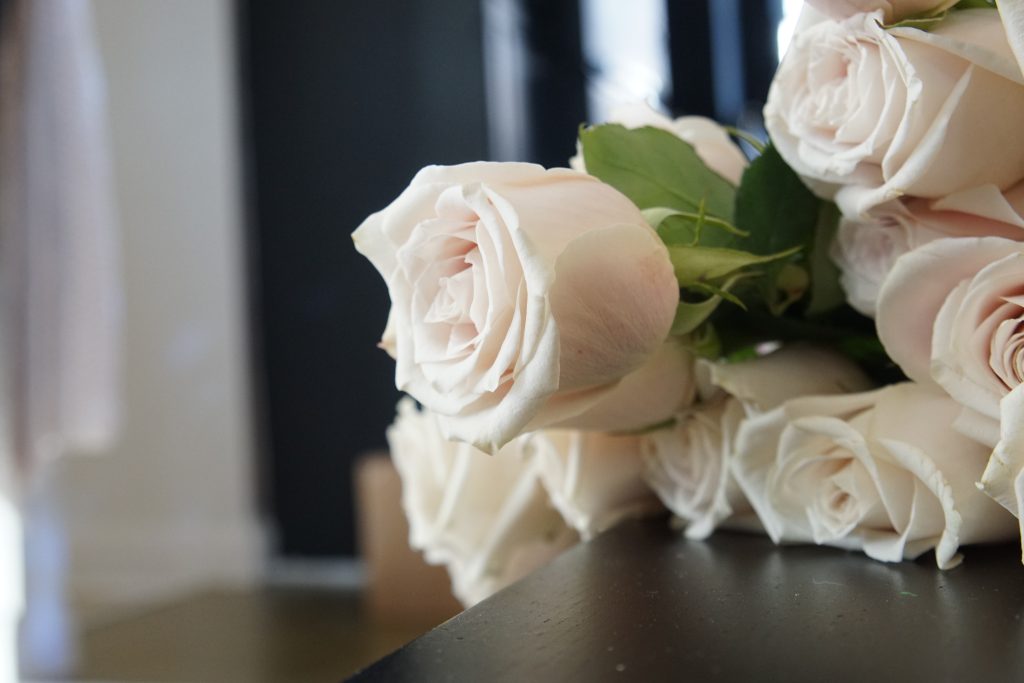 The cultivation of roses is documented in various early civilizations dating as far back as 5,000 years ago. In fact, some cultures were so enthusiastic that their food supply was threatened and some rose gardens were plowed under by decree (Han Dynasty). By 500 BC, there were hundreds of books written in China on the subject of roses. Ancient Romans, Greeks and Phoenicians not only cultivated roses but also traded them, acquiring roses while they traveled and conquered new lands. Consequently, roses spread throughout the Middle East and the Mediterranean.

There are rose references in Egyptian hieroglyphics and rose garland funeral wreaths have been found in tombs which were composed entirely of hybrids. Before the fall of Rome, there were as many as 2,000 public rose gardens throughout the empire and most of the aristocracy had their own private rose gardens. After Rome’s fall, very few rose gardens survived and they were kept only by the king and monks, who cultivated them for medicinal purposes. These same monasteries later developed into botanical research centers. Gradually, social conditions improved and those who returned to their homeland (and increasing numbers of travelers) revived those traditions and rose gardens appeared again. 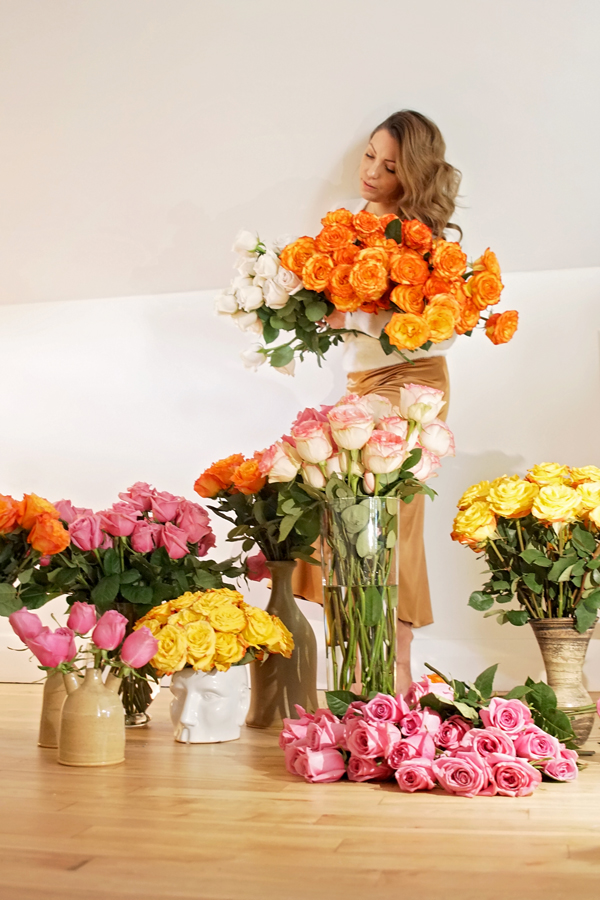 Roses have been grown in North America for a long time, too. Early explorer records indicate that the Indigenous people of the James River Valley were deliberately cultivating wild roses. Some settlers brought rose varieties along with them and proceeded to plant them in their new gardens. In the 18th and 19th century, trade with East Asian countries increased and new roses came from China, where centuries of cultivation had resulted in roses that could bloom repeatedly in the same year, something they had never seen.

Aromatic tea roses and the China rose had a tremendous impact in the West but some of the old roses still exist as heirloom varieties, (Gallica, Damask & Alba are a few). The old garden roses exude much more fragrance from their beautiful blooms than many modern varieties (but often have a single blooming period). Modern roses are now the norm, with so many varieties to choose from, it can be confusing. You can find an excellent primer on types of rose shrubs here.

Fast forward to modern times, when the cut flower trade is big business on a global scale. The biggest growers and exporters of cut flowers are the Netherlands, Ecuador, Columbia, Kenya, and Ethiopia. While “the Netherlands still dominates the cut flower trade worldwide, countries on the equator are becoming increasingly important as growers.” (BBC) In recent years, this booming industry has made great strides. 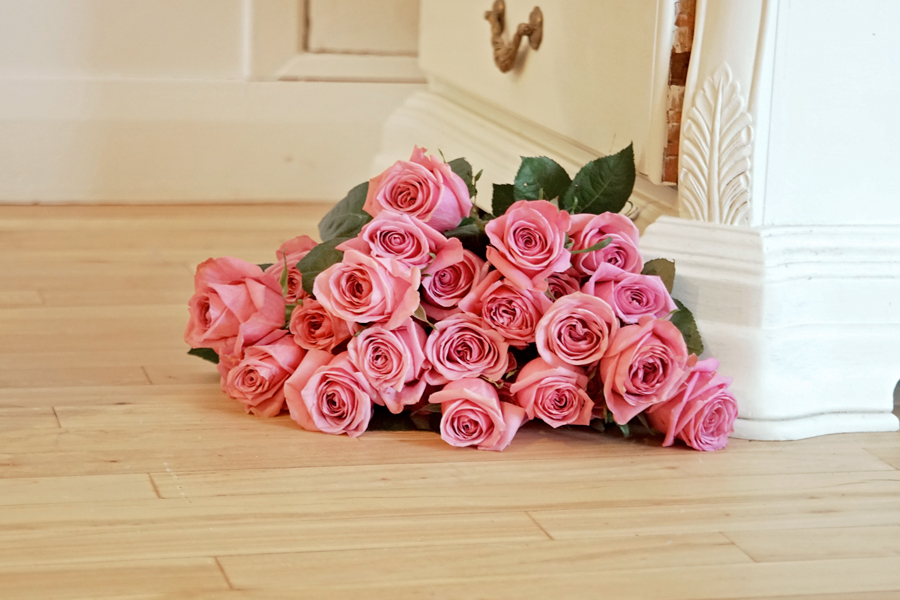 The Rosarium sources all of its roses from Ecuador, the third largest exporter of cut flowers in the world. At the equator, natural daylight beams year-round, with long hours of sunlight and high altitude creating perfect conditions for a longer growing cycle. With 15 weeks of growth compared to the usual 8 weeks, the result is very long-stemmed roses (5’ in height) with very large heads. The colder nights result in bi-colored flowers with contrasting hues on the edges and inside the petals, adding to the aesthetic value of the blooms. These longer lasting roses are also ideal for transport and as the shipping process was refined down to a science, the quality of the flowers and their vase life has vastly improved.

Floral culture in Ecuador was kickstarted in 1991 and has flourished, with some important adjustments, ever since. The kickstarter was designed to promote legal and legitimate industries and when the project concluded, the industry had become more than robust enough to stand alone. It wasn’t ideal in the beginning but as working practices and conditions improved, many rose plantations began to welcome visitors as a side attraction, creating an additional revenue stream. 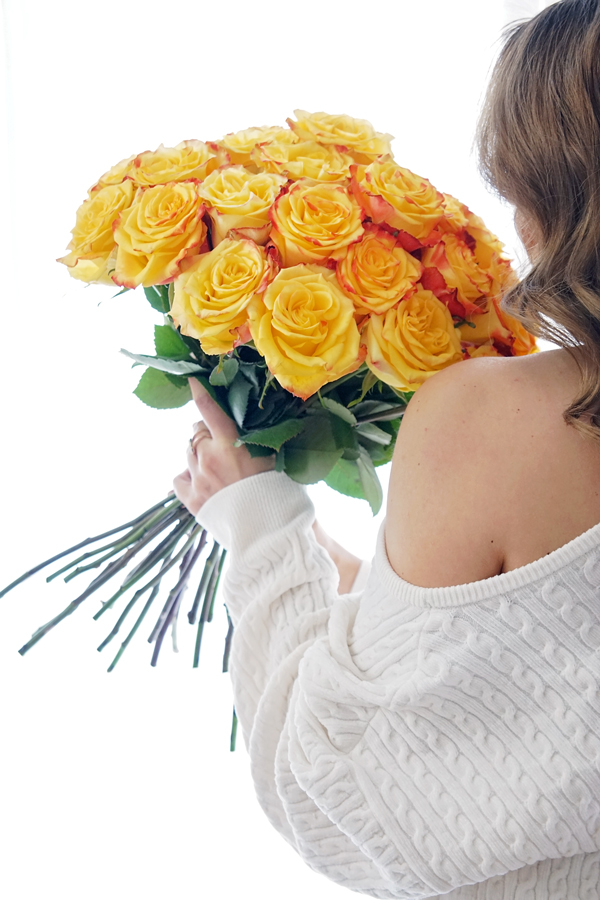 While you may not live on the equator, you can grow roses too. Perhaps you already have some on your property. People sometimes avoid growing roses because their care seems too complicated but for the casual gardener, it isn’t any different than caring for most perennial flowers. There are a plethora of articles and posts online offering advice on how to grow roses, so you’ll find plenty of links with more details throughout this post.

Location is essential. Roses require at least 6 hours of sunlight, (except for some floribundas). They prefer not to be too crowded and require space for air to flow around them, (to avoid black spot/mold). When planting, dig a generous hole in good or improved soil and plant the bud union just below the soil if you live in a cold climate and just above if you’re more southern. Always avoid wetting the foliage but do water generously until your rose is well established and then, water thoroughly when conditions are dry. Amending the soil before planting is ideal but roses also benefit from feeding during the growing season; compost or natural fertilizers can be used. 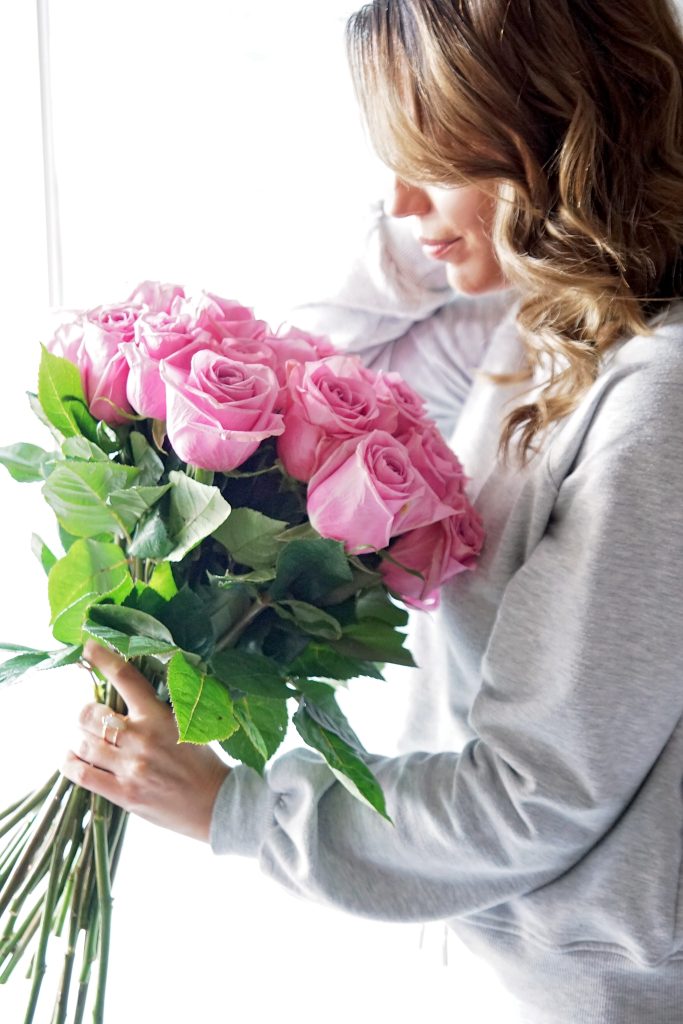 In terms of spacing and design, it’s recommended to plant roses in groups of three, five, or seven. One rose planted on its own can look a bit awkward, unless it’s a shrub rose or a climber. Roses also benefit from companion planting. I used to always plant chives and lavender in the rose bed. Members of the onion family are said to make the rose fragrance more intense, but they also keep aphids away and may even prevent black spot. Similarly, various herbs may deter beetles and rabbits while hiding any bare canes in late summer. (The Spruce) If you do have problems with your roses, there is advice available ranging from organic and DIY solutions to the best nursery products designed to resolve the situation.

Roses do need to be pruned but it isn’t a big chore. Using good sharp shears will make the job easier and you may want some gloves, too. Make sure your pruner’s blades meet and slice rather than crushing the rose canes (stems). During the growing season, prune fading blooms from the stem just above a proper leaf, (composed of five leaflets) to promote more flowers. Cut at a 45 degree angle when pruning, and always prune above an outward-facing bud to encourage proper growth. (If all the canes are facing inward, you end up with a tangled, thorny mess.) Cease pruning in late summer or early fall as plants begin to go dormant. 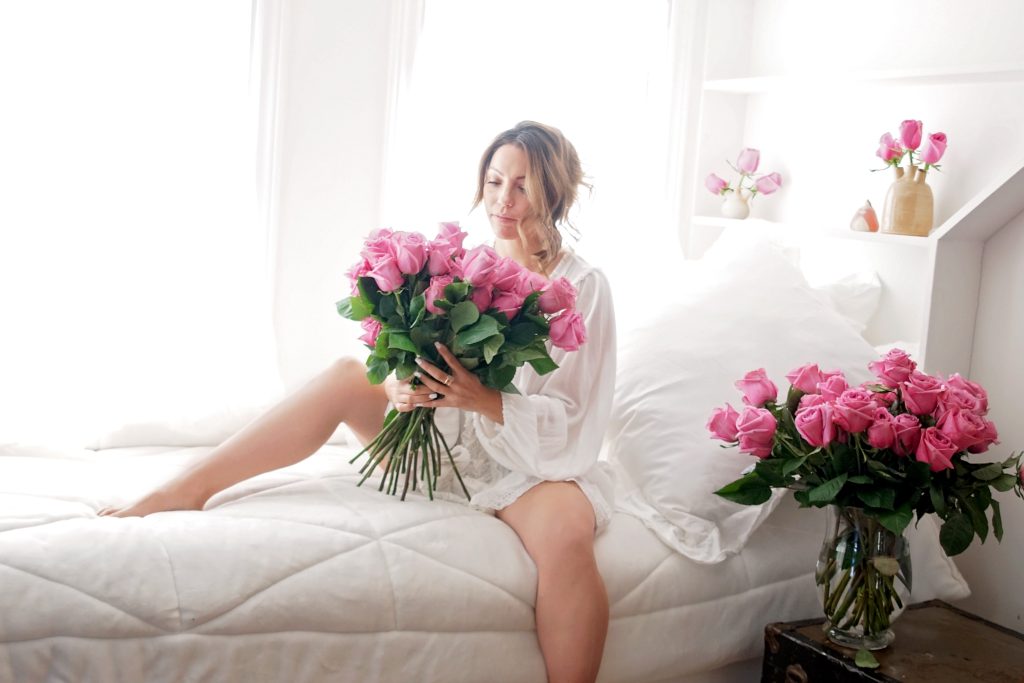 Depending on where you live, preparing roses for winter is important. In colder climates, they will require more protection from cold, snow, and harsh winds. Clear away all dead foliage and decaying matter from around your rose canes first. After a hard frost, (later in the autumn), you can cut tall canes or bind them to protect them from breakage. Some people opt to wrap the rose canes or put a protective structure over them. You can also mound soil at the base to protect the bud union.

In the spring, a major pruning is much more vital. This will set the stage for the entire growing season. Prune away all dead canes above outward facing buds in order to create a vase-like shape. The rose itself will help you as the buds begin to grow, indicating that this is the right time to prune and showing you what parts of the plant are still alive. Dead or diseased canes should be pruned and removed during the active seasons. 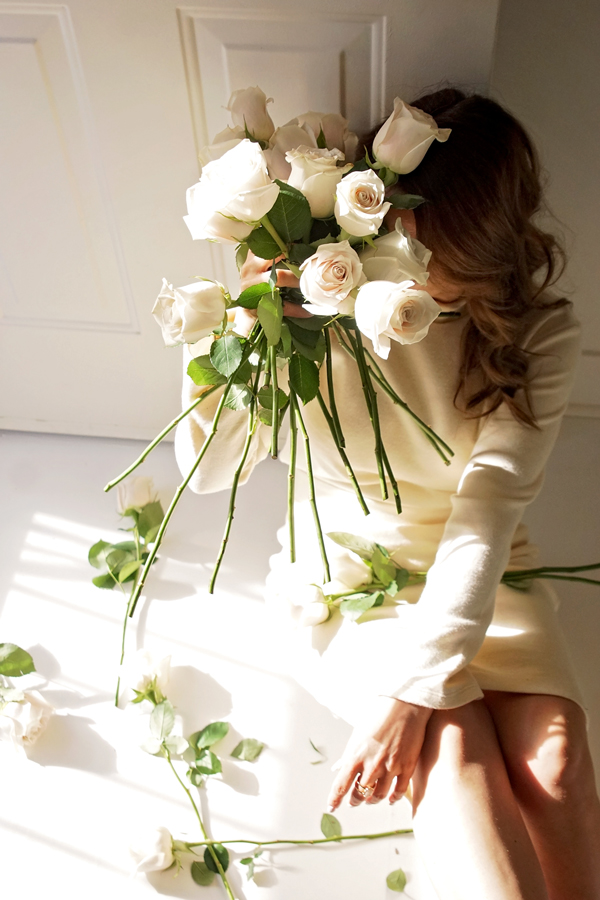 In time, the routine of caring for your roses throughout the year seems minimal, considering the abundant return: the incredible scent and beauty of living roses in your garden or framing your door, the single perfect blooms to place at your bedside, personal nostalgia or the commemoration of a special event. A natural, evocative beauty that has stood the test of time, roses continue to captivate and delight our senses, lending a sophisticated sense of occasion wherever they appear. 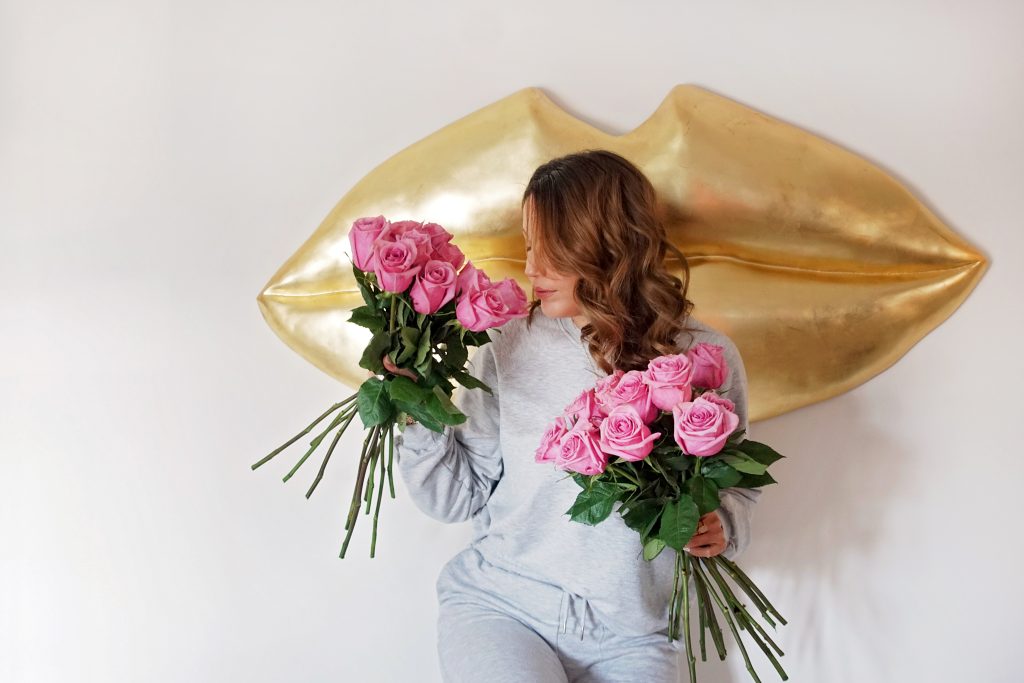 A thorough “History of the Rose”

10 Things Nobody Tells You About Roses

“Caring For Roses” from the Royal Botanical Gardens