The fashion world is shrinking…   “looks are now universal,” says Harry Rosen. Things have changed since he and his brother Lou opened a small men’s clothing store, specializing in made-to-measure suits. Their initial investment of $500 is now the cost of a suit by Ermenegildo Zegna, a brand the menswear chain was first to introduce to Canadians, over forty years ago. Since then, it has acquired exclusive collections from some of the industry’s top brands, including Canali, Brunello Cucinelli, and Tom Ford. Currently, their website boasts over 136 brands.

The business is about more than labels: “Your clothing should be consistent with your point of view and the type of person you are,” he says. From his humble beginning as a 500-square-foot storefront, he has bucked the adage: “Clothes make the man.” He preaches the opposite. 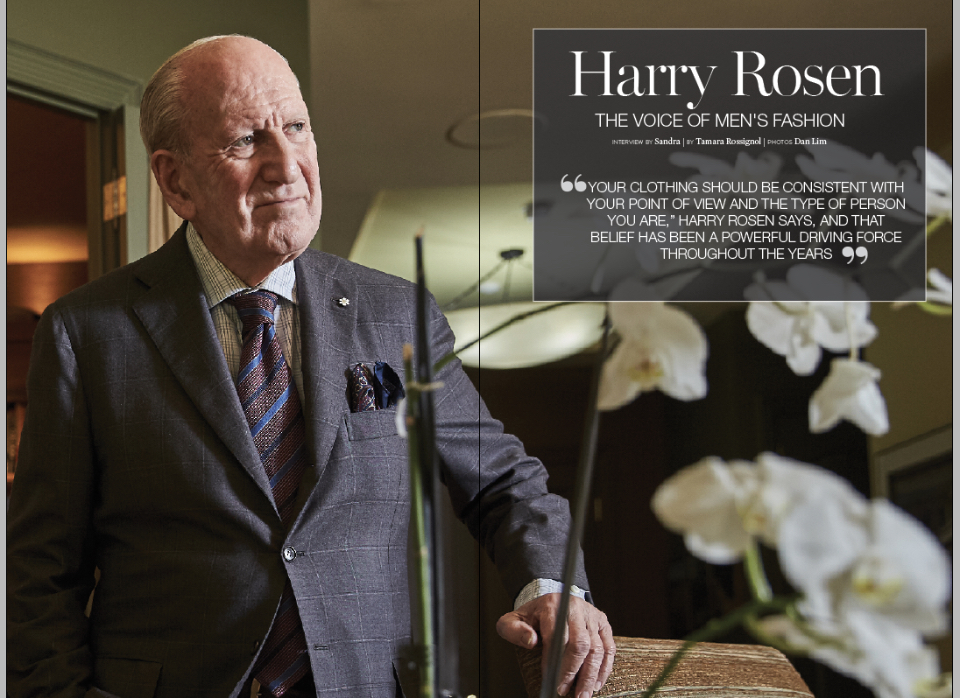 His team takes great pleasure in discovering their customers’ unique tastes. They believe every individual has distinctive character, which can be exhibited through the clothing they wear. It’s the same way a certain piece of entertainment, perhaps a song or film, can transcend the medium to evoke in the consumer powerful feelings of confidence or tenacity. Harry is motivated by personally assisting his customers to reveal their strengths. At special request, he continues to style his customers.

During a mid-1960s European adventure, Harry was exposed to designers and merchants who inspired him to reinvent how he dressed himself and his customers. Subsequent tours allowed him to study the fundamentals of menswear. His love of finely-crafted apparel drove him to incorporate the best of European tailoring with the sensibilities of his Canadian clientele to create a unique shopping experience in the rapidly expanding Toronto fashion scene.

The digital revolution has allowed designers from under-serviced markets to showcase their wares, but according to Harry the “voice of men’s fashion is still Italy.” Although he adores—and stocks—a stunning number of brands hailing from the Mediterranean nation, he also gives a nod to his neighbours: established, as well as up-and-coming Canadian designers. Harry Rosen has partnered with Samuelsohn for decades; the Montreal-based label is responsible for manufacturing the retailer’s house brand, JP Tilford.

Harry recounts a decades-old infatuation with soft-shouldered suits, popular at the time in England: a smooth line, from the cuff through to the sleeve and shoulder, to the lapel, requires precision tailoring. The idea that such a casual style was, in reality, one of the most time- and skill-intensive to manufacture, was in was in keeping with the integrity that formed the central tenet of Harry’s burgeoning empire. It’s apparent in the way he stocks his shelves and the way he treats his customers and employees.

Outside the company’s fifteen locations and three outlets, he serves as the Chairman of the Toronto Cancer Society, and is a key player in the McEwen Centre for Regenerative Medicine, the University Healthcare Network, and Ryerson University. In over a decade, his company has raised more than $4 million in support of prostate cancer research.

The menswear magnate is driven to help his customers create the best possible versions of themselves. It’s evident not only in his philanthropic endeavours but also the way Harry runs his company. His realization: that style is an innate process, but the proprietor “…always had a feeling that men needed advice when it came to their clothing.” Harry intended to build a reputation that reflected quality clothing and superior client relations. He wanted to show each customer they were capable, with a little guidance, of discovering how to look their best.

Harry kept meticulous records on his customers, building a library of contact information, personal tastes, and measurements. He made house calls and visited his customers’ places of business, a point of difference between him and his competitors. Many thought an upscale menswear retailer in Toronto’s working-class Cabbagetown was doomed to fail. Instead, his single storefront grew to six by the time his eldest, Larry, entered college.

The father-son team have worked together for over thirty years, the latter half named CEO in 2000. Larry has been able to grow the business to over $300 million in annual sales, an exponential increase over his father’s first year in business, but that’s an unfair comparison. Much has changed in the sixty years between then and now. The company has fifteen stores—and three outlets—instead of one. Harry Rosen has flagship locations at some of the country’s biggest commercial addresses. The company’s largest location, at 82 Bloor Street West in Toronto, is 1,000 times larger than the initial tailor shop.

It’s the same integrity that Harry Rosen has embodied since the Canadian company’s opening day. They are thriving in a market now saturated with American department stores like Saks Fifth Avenue and Nordstrom’s, and fast-fashion retailers like Suitsupply and Indochino. During each expansion, Harry has retained what initially made it successful: excellent clothing and resourceful sales associates. Though now stored digitally, the chain still records customers’ sizes and styles. They still follow up, outperforming most of their competitors in the post-sale timeline. It’s one of the reasons many of their customers are so fiercely loyal, sharing shopping trips across generations of family members.

That is what it’s always been about for Harry: family. He started the business with his brother and passed it on to his son. It’s why many of his employees have been with the company for so long and it’s the reason his customers return, generation after generation. Harry makes you feel like you are part of something much more than merely visiting a shop and choosing a suit. This is especially true, given the breadth of his work in many Canadian communities and the passion and generosity with which he supports the work of cancer researchers. After more than sixty years and over a dozen expansions, the only thing that has outgrown the size of the menswear chain is the size of Harry’s heart.