Kentucky is where every man should know and go 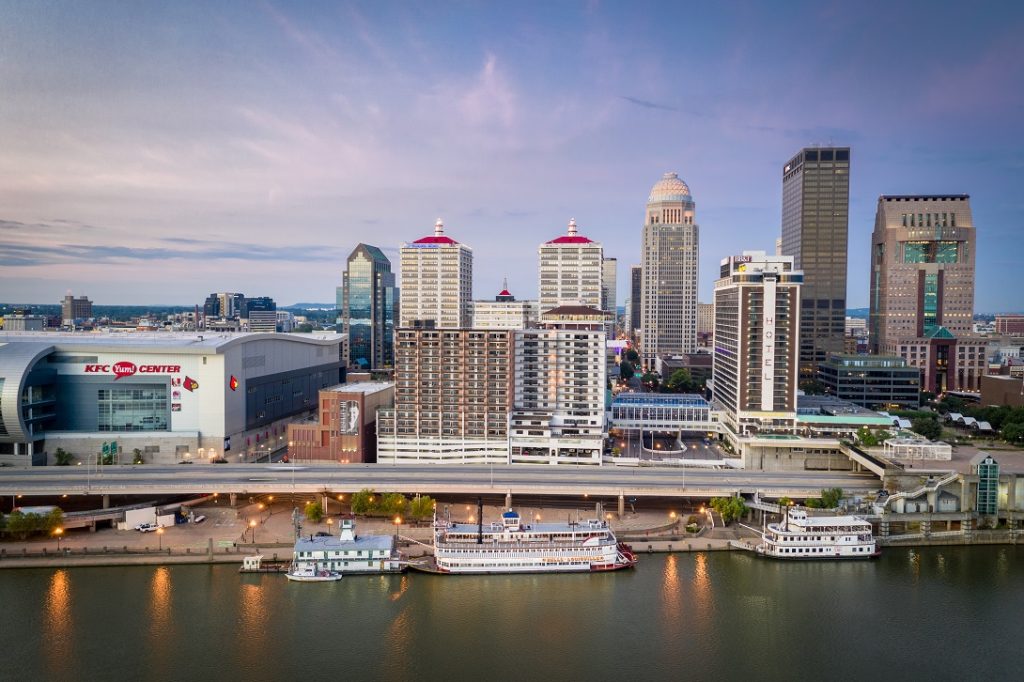 There’s no question, that of all the states in the union, Kentucky’s got it all for the rugged adventurous man. Let us count the ways: The bourbon trail, Corvette museum, fishing, horse racing, luscious food, Louisville Slugger museum, and the world’s longest cave system.
And the tourists are returning! Latest numbers show that trips to the commonwealth reached a whopping 70.5 million in 2021, 96% of pre-Covid levels. (To put it in perspective, 41 million visited Louisiana).
The city pulls in visitors from around the world for the annual Kentucky Derby, the most famous horserace in the US, held every May. Plus, the state’s signature culinary favorites, popular among visitors and locals, include the following: bourbon balls (bourbon soaked donuts), hot browns (an open faced cold cut sandwich), bergoo (meat stew) and Derby pie (chocolate walnut). Mmm good!

Fly into Cincinnati, and you’re a fifteen minute drive to Covington or Newport, Kentucky – a great way to start your trip.
Newport is famous for being the “Vegas,” before there was actually a Vegas. The town has an edgy, storied past as a Prohibition-era bootlegging capital, a mobster’s paradise, and America’s first major gambling city. That history and the region’s Prohibition “side hustle” of bootlegging helped preserve time-honored distilling traditions for future generations of bourbon makers.

Meet your Newport Gangster Tour guide, and learn of the incredible history behind The Syndicate – the onetime “it” venue for all the big acts of the day, that is now a wedding venue. A giant mural in the lobby shows off photos of the heydey of headliner acts that came to perform there, including Frank Sinatra, Sammy Davis Jr., Bob Hope, Judy Garland, Tony Bennett, Dean Martin and so many others.

Stroll the streets of Newport, as you learn the jaw-dropping stories, including where mobster shootings took place (some building bullet holes remain!), where the dozens of brothels used to be, who framed who, and who literally back-stabbed who! Famed strongmen Meyer Lansky and Bugsy Segal flexed their muscle and influence on the neighbourhood before they and others laid their footprints in the Vegas sand.

Newport on the Levee is an entertainment complex that sits on the banks of the Ohio River, and boasts some of the best skyline views of Cincinnati, and local food vendors. The indoor artisan market includes Colonel De Spices, a family business that offers over 500 culinary herbs, spices and custom blends, including mixes you can’t find anywhere else. 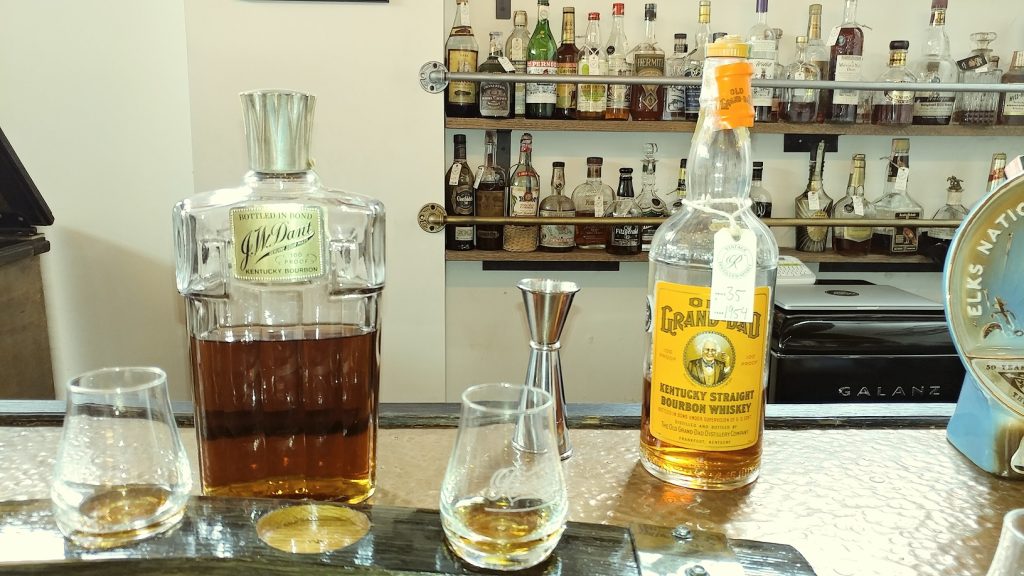 A sampling selection from Revival Spirits

Of course, bourbon is a Kentucky tradition. In fact, 95% of the world’s bourbon is distilled in Kentucky, and production continues to grow. Enjoy a unique tasting in Covington, at Revival Vintage Spirits, sampling their collection of rare and priceless 50+ year old bourbons. As America’s foremost vintage spirits collector, charismatic owner Dusty Bonds has a vast knowledge of all things boutique bourbon.

While in Covington, check out two dining establishments: do lunch at Smoke Justis, a sports bar that serves up smoked meats, wings, nachos and house-specialty fry boxes. Do dinner at Bouquet Restaurant where Chef/Owner Stephen Williams elevates the region’s best local and seasonal ingredients. The restaurant’s won many local and national awards since opening in 2007.

Head on to Louisville, the state’s largest city.

And to round it out, take in the Evan Williams Bourbon Experience in downtown. Like with any bourbon tour, you’ll have an opportunity to taste a variety of types, see the machinery and barrels up close, and view a cool re-enactment video of how the company began almost 250 years ago.

Meanwhile, about an hour and a quarter away, the Lexington Distillery District is a recent development: a 25-acre property with distilleries, breweries, shops, restaurants, entertainment and nightlife in beautiful historic buildings. Among them, check out Ethereal Brewing for micro-brewed specialities. Then go for ice cream at Crank & Boom (with signature flavours like bourbon & honey, blackberry & buttermilk, blueberry lime cheesecake, and a dozen more!). People magazine rated it one of the top ten ice cream shops in the US.

Touted as the “best date spot in Lexington,” Lockbox is inside the 21c Museum Hotel. The menus, prepared by Chef Nick Fisherkeller, showcase a commitment to the community’s craft purveyors, and high-quality seasonal ingredients. The use of spices and herbs are innovative. So whether it’s breads and spreads, shellfish, fresh spins on salads, quail, steak, scallops, fish, or the creative desserts, it’s as much a meal as an experience. 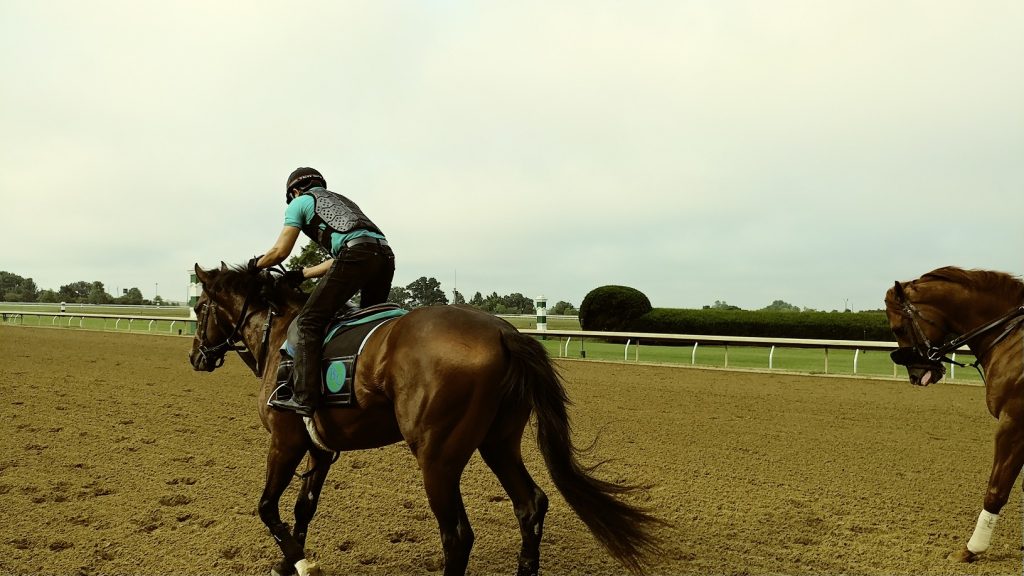 A race at Keeneland where the Breeder’s Cup takes place in the Fall, 2022

About an hour away from Lexington, is the highly-recommended Bardstown Bourbon Company tour. Start with the obligatory tasting (delicious, I might add), and walk right into the distillery itself, where you’re face to face with the boiling corn juice that will grow up to be fine tasting bourbon. It’s amazing to see the hundreds of thousands of barrels, and your guide will share amazing stories about how bourbon is created.

This itinerary alone could be at least five days – and there’s still so much more to tour! So if you’re thinking of a warm place to go, with fun at every turn, definitely put Kentucky on your bucket list.

– Covington: Hotel Covington, located at the Cincinnati waterfront, oozes vintage style and comfort. Rated 13th out of the 25 best hotels in America, by Trip Advistor in 2021. 15 minutes by car from Cincinnati/Northern Kentucky International Airport.
– Downtown Louisville: Hotel Distil, Autograph Collection is just blocks away from the Evan Williams tour, Louisville Slugger museum, and many of the city’s finest dining establishments. It touts itself as “setting the standard for luxury in Louisville hospitality.” It earned the 2021 Trip Advisor Travelers Choice Hotel.
– Lexington: 21c Museum Hotel has a bon vivant, chic boutique feel to it. The halls and public areas also double as a modern art museum and cultural center. Inside the rooms are custom-designed contemporary furnishings – a stand-out feature.