On Leadership, Luxury and Legendary Service

Isadore Sharp is modest when asked to describe his lifetime of accomplishments: “I’ve been fortunate to be a reasonable success.”
From all objective standards however, his success has been more than reasonable, and can even be described as exceptional.
Sharp is founder (and current chairman) of the Four Seasons Hotels chain; as of 2016 located in 33 countries, with 99 hotels — and another seventy on the slate to be built. Condé Nast Traveler ranks 18 Four Seasons hotels in its worldwide “Top 100” list, more than three times the next most cited chain. Four Seasons has been named one of the “best 100 companies to work for” by Fortune Magazine each year since the list began in 1998. It also has one of the lowest turnover rates in the hotel industry.
Suffice it to say, the company’s name is synonymous globally with the highest level of hotel service. Sharp summarized his fifty-plus years of entrepreneurial experience and business fundamentals in his book, Four Seasons: The Story of a Business Philosophy in 2009. He has never made his formula to building a successful first-class hotel chain a secret.

“It comes down to one principle that transcends time and geography, religion and culture. It’s the Golden Rule — Do unto others as you would want done unto you. The simple idea that if you treat people well, the way you would like to be treated, they will do the same.”

The rest, as they say, is commentary. 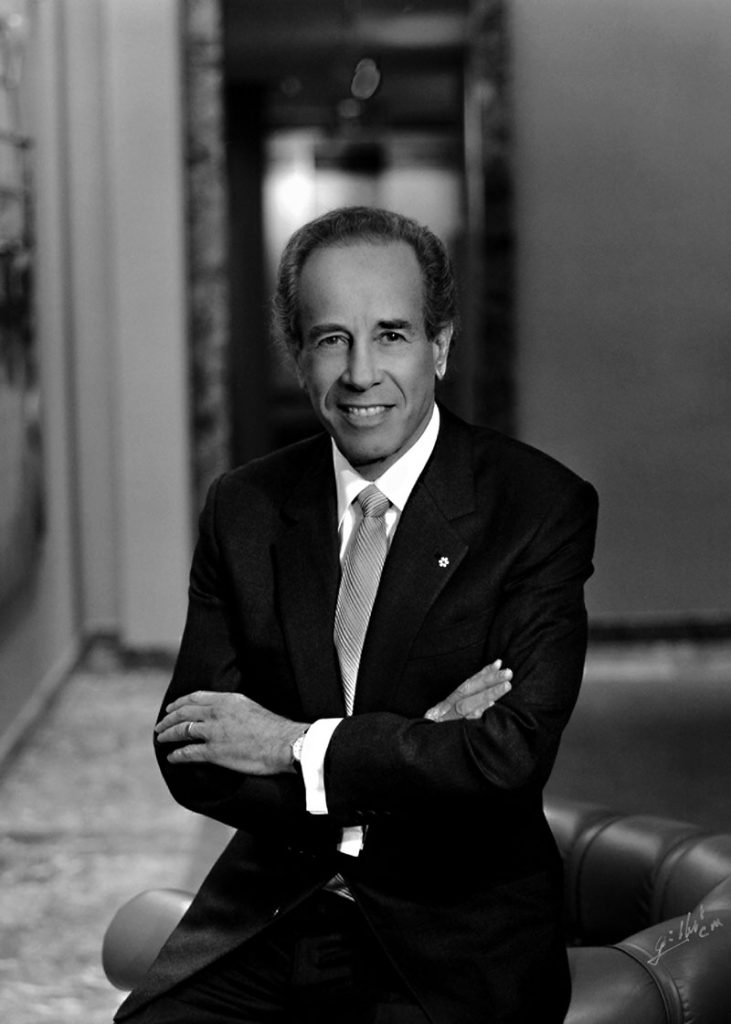 Sharp and his three sisters were born to Polish parents who immigrated to Toronto before his birth in 1931. Fortunately, his parents fled Poland a few years shy of an oncoming Holocaust, to a country that provided the opportunity for their son to become one of Canada’s most successful businessmen.
At age 21, he graduated from Ryerson University with a degree in architecture, later working with his father, Max Sharp, in the construction business. While building a motel for a client, the light bulb went off in his head to create one for himself, one that he would own and operate. (He knew nothing about the hotel business at the time.)

“But when the spark doesn’t go out, you just can’t understand why people don’t see this as a good idea. Well, in the evenings after work I’d be promoting and talking to people, to buy into this idea. It took five years to find all of the investors. When you have a passion, a belief about something, it allows you to persevere.”

He finally founded the first Four Seasons Hotel in 1960, opening on Jarvis Street in downtown Toronto, a modest motor hotel with 125 affordable rooms. “I needed a lot of land, and that seedy area was the only part of town I could buy a lot of land that was quite cheap,” he recalls.
“I wasn’t intending to go into the hotel business; I hired people to run it, and then expected I’d sell it. It paid off; I paid off the people I borrowed from. I decided that this worked so well, I’d build a second. The second was even more successful, close enough to the city that it would accommodate those coming into the city. A phenomenal success — the Inn on The Park in Toronto.”
Ten years later, his hotel experience had secured international renown. In London, England, competing against several known long-standing high-class hotels, the Inn on the Park became known as the best among the best, in 1970. The building hasn’t stopped since.
The luxury brand took it up a high notch when the Four Seasons pioneered the idea of shampoo in the shower, 24-hour room service, bathrobes, same day cleaning and pressing, among other avant garde (at the time) services that have since become hotel staples of virtually every chain on the planet.
Additionally, superb customer service, coupled with a dedicated crew, were key ingredients in standing out above the already crowded hotel industry. 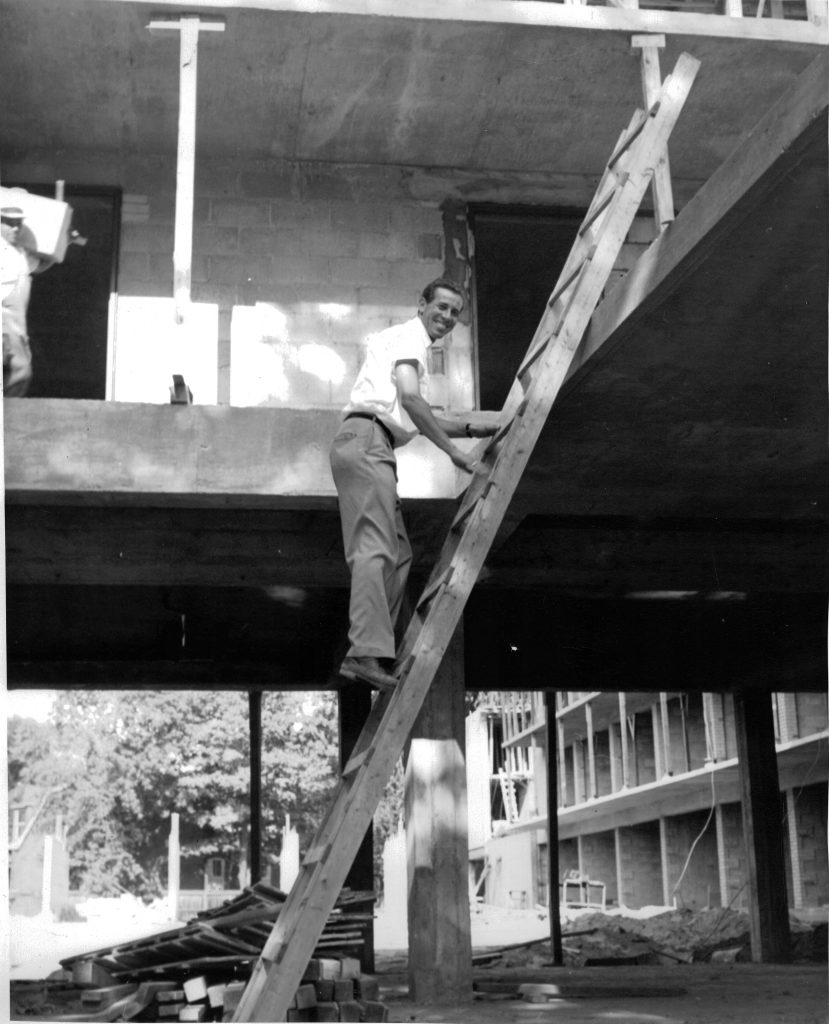 “I was quite able to hire people with excellent skill sets, and give them the responsibility and room to grow themselves. That helped the company grow. It’s not about what I can do; it’s about what we can do, and ensure job satisfaction.”

Meanwhile, in order for the business to truly succeed, teamwork was essential on the home front, too. He doesn’t hesitate to credit his wife of sixty years, Rosalie, for supporting the vision, and filling in family obligations. Together, they have three sons, Jordan, Gregory and Anthony.
Christopher, another son, succumbed to melanoma cancer in 1978 — a year after Terry Fox was diagnosed with cancer during his famed cross-country Marathon of Hope. With timing being everything, Sharp was inspired by Fox’s drive to raise awareness, and to help science find a cure for cancer.
When Fox had to cut short his run due to his deteriorating health, Sharp sent a telegram to Fox’s bedside, vowing to continue the work, and create a marathon event in his honour. Sharp helped originate and is director of the Terry Fox Run, Canada’s second largest non-government fundraiser for cancer research. Today, almost a half-billion dollars has been raised for cancer research in Fox’s name and the event is now held in over 40 countries.

The Sharp family philanthropy has now become legion — as they passed their name and legacy onto reams of charitable causes including the Four Seasons Centre for the Performing Arts, the Ontario College of Art and Design, Mount Sinai Hospital, and a list a mile long. “It’s important to make people’s lives better in any way you can,” notes Sharp, who has been honoured on countless occasions for his successes and his giving. To name a few: In 1992 he was made an Officer of the Order of Canada. In 1998 he was inducted into the Canadian Business Hall of Fame. In 2003, he received the Ontario Ernst & Young Entrepreneur Of The Year Program’s Lifetime Achievement Award. He received the Lifetime Achievement Award, from the International Hotel Investment Fund.
Still, when asked what he believes is his crowning achievement, it all comes down to the individuals who are each an integral link in the hotel chain.

“Today, we have close to 45,000 people that work in the company. When people talk about my success, I succeed because they succeed and vice versa. Their lives have been impacted, and were enhanced and enriched, because of the company’s success.”