You might call it four decades of love-aBILL-ity.
When Bill Murray belted out a lyrical version of the Star Wars theme as Nick the Lounge Singer on Saturday Night Live in 1979, there was just something quite undeniably lovable and endearing about it (even if it was off-key). A year later, his Meatballs summer camp chant, “it just doesn’t matter!” would be more than just a catchphrase. It would evolve, in a sense, into the future Hollywood star’s trademark magical, spontaneous comedic moments.

The campers, of course, loved him — and so did we.
It’d be irreverently channeled during the quirky Razzle Dazzle marching song of Stripes, or flirt-slapping sexy co-star Sean Young on the tuches with a spatula.
And it wasn’t enough he stole an entire episode as a substitute teacher in the much-forgotten Sarah Jessica Parker vehicle Square Pegs (1983).
But he let sixteen-year-old co-star Jamie Gertz take a joyride — for hours — in his Mercedes convertible, instigating much panic amongst the crew about the suddenly disappearing duo.

When they returned, Bill had explained, matter of factly, that when he heard Jamie got her license, he let her drive his car. They grabbed some burgers.
Because … Bill. Like a Cracker Jack box, you know there’s a prize, but you never know what it’s going to be (or when it will appear).
That approach was tapped vigorously when his career exploded after Ghostbusters. Dr. “Back off man, I’m a scientist” Venkman is forever seared into our psyches as an iconic character because of Bill’s come-out-of-nowhere sardonic seasoning
Since that time, he’s starred in what could only be categorized as a long string of timeless classics, undoubtedly due more to instruments of Bill Murray’s charming genius than screenplay, set pieces or cinematography or a combination thereof.
Of special note is his ability to embody humour, versatility, and poignancy.

From Zombieland’s “I did eighteen holes, and no one bothered me,” to the man searching for a son in Broken Flowers, to a guy in Japan who found love in an unusual place in Lost in Translation, to the Zen perfection of Groundhog Day, to the improvisational waiter in Coffee and Cigarettes, to the man who found himself in the right place at the wrong time in The Man Who Knew Too Little, to a not-so-crazy fellow acting a little crazy in What About Bob?, and a crooked clown in Quick Change … Only a skilled thespian of his caliber could deftly carry Hamlet and Charlie in Charlie’s Angels in the same year. And Every Single Wes Anderson Film.
Very few actors can say they’ve had some seventy acting gigs in the course of four decades.

Bill is indisputably prolific, respected, likable, and yes, loveable. Yet a most mystifying actor of our generation.
Part of this allure, to be sure, includes living “off the grid” so to speak.
Elusive, because he bristles at the Acting Establishment’s cartel of managers and agents so much he just decides on his own, and on his own time, what roles he takes. Those ‘in the know’ call his 800-number, and make a pitch.
If he feels like it, he picks up or returns calls. Or not. 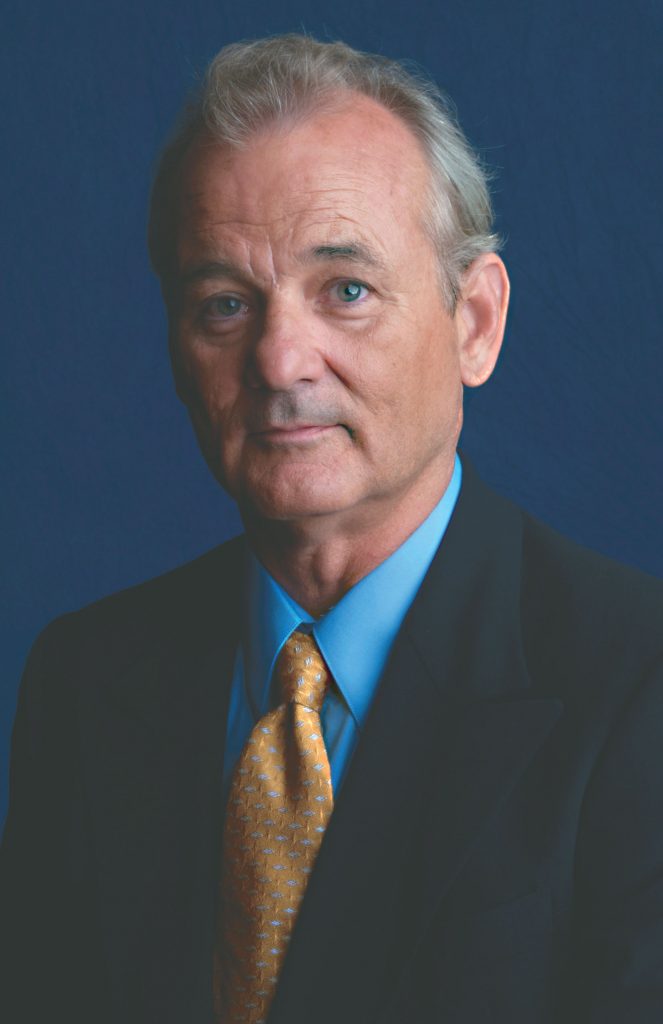 Director and screenwriter Sophia Coppola had to harangue him countless times just to star in Lost in Translation (for which he was nominated for an Academy Award.)
A similar (but not unexpected) experience occurred with this issue’s featured cover photographer, Timothy Greenfield-Sanders.
“When I was asked to photograph Bill Murray, I was given his 800-number and told to arrange it myself. He didn’t have a publicist. ‘It won’t be easy, they said.’”
Greenfield-Sanders called Bill several times, trying to arrange for the actor to visit the photographer’s Manhattan studio.
“But, there was always an excuse. Finally, I said, ‘Bill, I’ll come to you with my giant camera.’”
Bill agreed, and the next day, they convened at Bill’s basketball gym, a building formerly a dance studio. “It was huge, with beautiful hardwood floors. A perfect studio,” Greenfield-Sanders explains. “Bill was a delight. So inventive on set, so fun to be with. After the last shot, he had pizza delivered and we all sat in a circle around him, listening and laughing with the legend himself.”
It is any surprise his (foregone) conclusion was: “Yes, he is a mythic figure. He runs on his own schedule and in his own world.”

Another case in point: this interview, taking place at the corner of East 59th and Park Avenue — ‘cos that’s how Bill rolls. No disguise; not even a fake beard or a curled down ballcap. Just the open fresh air, and Bill.
“I just like to walk, you know. I’ll just start walking and see where it goes,” he noted.
That aimlessness sounds a lot like the time in the late 1970s when Bill volunteered to take Lorne Michaels’ (his SNL boss) car from New York to Miami. Michaels was plotzing that he didn’t hear from Bill for weeks. Lo, the driver finally arrived; the odometer with manifold number of miles it was supposed to have on it.
The icing on the cake? While on the road, Bill had a brand new car stereo installed for Michaels.
The choices of what films to accept follow the same kind of laissez-faire ethos. “I pick roles where I can light a spark. Anything. An idiosyncrasy, even,” he said, as his eyes looked skyward as though he was searching for a point of focus. “It might just fall into my lap.”
Indeed, his two-minute cameo role in the 2016 pilot of TV’s Vice Principals came about precisely that way: the director, never having met Bill before, plopped next to him in the stands at a minor league baseball game, and handed the actor a script. Et voilá, a cameo was born.
As for what he looks for in the characters he plays, the response is a hybrid of horoscope and fortune cookie: “Hit your funny bone; but, instead of tingly pain, it makes you laugh.”
Does he like being a celebrity?
“I’m not a celebrity.”
Seriously, though?
“Yeah, seriously.”
As for the most bizarre interview moment?
“Roger Ebert came into my hotel room to interview me after Scrooged came out. I had been shaving in the bathroom, came out talking to him with shaving cream all over my face. Told him he was nuts for panning the film.”

Fly by the seat of your pants, and see where it goes, Bill-style. That’s how only Bill Murray could get away with spray painting David Letterman’s set-desk in 1993.
He is predictably unpredictable. Loveably so.
There are legendary times he just… shows up. A Forrest Gump-like everywhereman.
He photobombed an engagement photo shoot in Charleston, South Carolina. He dropped in a stranger’s house party and did the host’s dishes. He guest bartends, on a whim, at his son’s Brooklyn pub. He shows up at New York City poetry readings (and sometimes does readings of his own). He owns a minor league baseball team in Charleston (and sometimes shows up to games).

And in October 2016, he just “showed up” in front of the White House press corps, decked in a Chicago Cubs’ uniform, and riffed on the team’s awesomeness.
Days later, at the Cubs-Indians World Series, a man sitting behind Bill tapped him on the shoulder, “Hey, could you leave a message on my answering machine?” Sure, Bill said, as he dutifully took the man’s cell phone.
The message?
“You’re a complete and utter idiot.”
Then Bill hung up.
That, in sum, is the enigma, lovability, and thrill of The Bill.