Hennessy cognac has released a new bottle design for its Very Special Limited Edition, an avant garde work created by Felipe Pantone, an Argentinian-Spanish artist, based in Valencia, Spain.

Launched officially in New York in mid-July, under the leitmotiv “Remixing the Present,” Pantone used his signature style of technology, geometry and vibrant colour gradations, to create a new visual perspective.

The bottle label design is an eye-catching kaleidoscope of 3-D forms, optical art patterns and QR codes. With an homage to sci-fi imagery, parts of the design is reminiscent of 1980s Tron universe, clashing with the 1990s Matrix universe, and a Star Trek holodeck.

The cognac company dates back to 1765, and in recent years other acclaimed artists have had Very Special Limited Edition collaborations, such as Vhils, JonOne, Scott Campbell, Ryan McGinness, Shepard Fairey, Os Gemeos and Futura, thus making Hennessy at the forefront of the contemporary and urban art scene.

The newly-designed bottle is expected to hit LCBO shelves by August.

Pie interviewed Pantone in New York during the launch:

What does “Remixing the Present” mean to you?

Pantone: For me as an artist, it’s a big thing – or I always understood it this way – every artist should really understand what is going on around them. For me, it’s not just about looking inside, but also looking up, and trying to reflect that in my work. The present is very important. When I started studying art history, I started seeing art as a science. When penicillin was discovered, you don’t want to try to keep discovering penicillin. It’s been discovered already. Why don’t we move on to cancer cures or whatever. For me, it was very important to learn about art history in order to be in the present, and not in the past, but always with the knowledge of what has been done before.

That being said, it is something I felt like Hennessy was doing, in a way. It’s a very traditional brand, obviously. It is super old. So, it has a lot of history. It’s a very traditional brand, but at the same time, they are also super present. They are trying to score young people, like myself, musical artists. They are trying to give their product a present twist, like making cocktails with it and playing with it. That was a big thing that we found in common and wanted to use it. 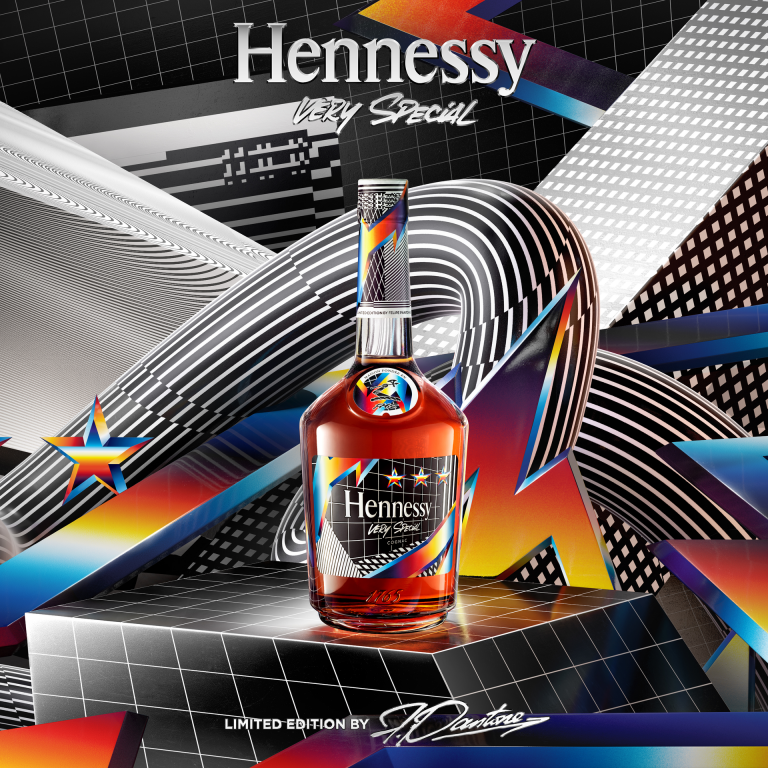 How do you sum up the bottle design theme?

Pantone: For me, my two big themes are dynamism and transformation. That is something that I’m always coming back to. I think they are two huge characteristics of a person’s energy.

What was the process of collaborating wit Hennessy like?

Pantone: It’s been long. We, literally, met over a year ago. I went, for the first time, to Cognac a year ago. I’ve gone over there many times. I went to Paris – they have headquarters there. I went to their archives, which was a game changer for me to get this to happen. Imagine the number of label designs, posters. It’s crazy.

What message did you want to send with the design?

Pantone: I don’t have a very clear message, but I guess that’s how abstract art works. You propose some elements, and then hopefully people relate to those elements, and you reach somewhere together. It’s not a very direct message. Hopefully, I’m taking people places but in a very loose way. Transformation is very important – also perception and distortion. 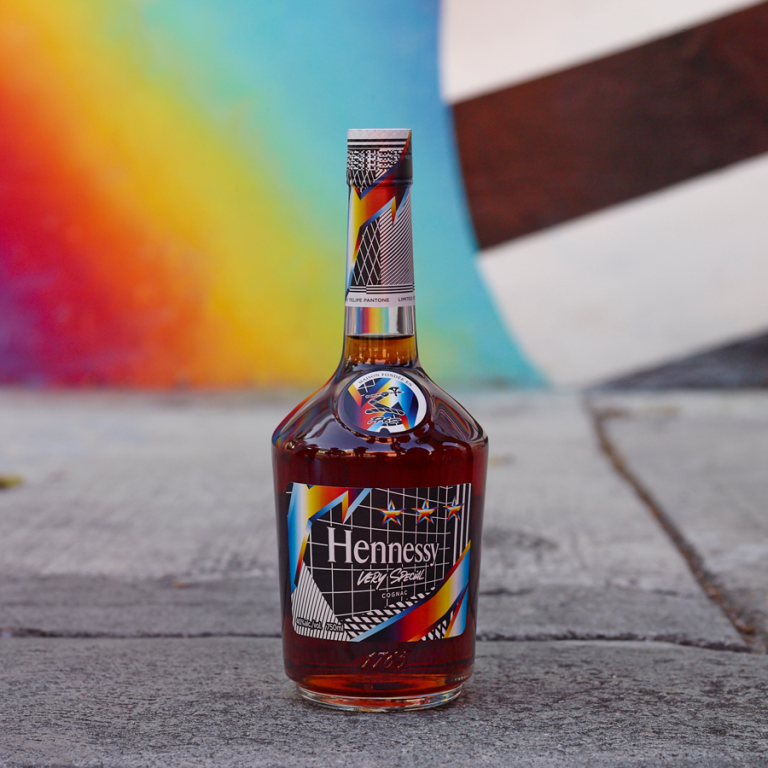 What defines success, as an artist, to you?

Pantone: Finding things – new things. I never had a goal. Do an exhibition in NYC, or being written about somewhere. To me, success is a path of finding things on the way. That makes me really happy. It makes me happy to come up with new solutions – graphic solutions – to come up with a new series of paintings and finding something that I didn’t know before. That’s why I think it’s like science in a way. Art is knowing what has been done before and finding your little twist to make it work. That makes me really happy. Hopefully, it’s going to be like that forever. Like Hennessy says, ‘I will never stop, never settle.’ That’s their motto. Always keep trying to find new twist and ideas.

And what is Pantone’s next artistic venture?

Pantone: To be able to keep taking risks and not get comfortable. Hopefully I will keep doing that. I work with galleries, and they keep telling me ‘That kind of painting you did, please make more of those because I can sell those until you die.’ That’s going to be a lot of money, but how about we make something fun, research, and keep stretching. It’s going to grow my pocket but it’s not going to make me happy. Success is to keep taking risks, but people still dig it and like it. If that happens forever, that would make me really happy forever.