It was a sunny Friday morning in Los Angeles without a single cloud in the sky as we arrived at the Playboy Mansion. There were exotic birds casually wandering across the lawns and not a flower was out of place. We received a warm welcome from their team to ours and immediately began setting up across the iconic property to shoot pieces of Mrs. Crystal Hefner’s new and upcoming loungewear line.
Crystal is a woman of many talents: model, DJ, TV personality and the recent addition of fashion designer. After meeting Hugh Hefner in 2008 this San Diego raised beauty’s world changed after being featured in Playboy and staring in a season of the reality television show Girls Next Door. With her multi faceted repertoire of accomplishments and global success through social medias Crystal only keeps going up from here.
Now that she has teamed up with the also successful and award-winning Rhonda Shear to create this feminine loungewear line, everyone will be able to enjoy that same cozy luxury in the comfort of their own homes. PIE Bookazine was given the wonderful opportunity to discuss her new line with Mrs. Hefner herself.

What made you want to start your swimwear and loungewear lines?

I think just doing modeling and doing different photo shoots and being styled for it kind of gets you into fashion, and you start picking stuff for yourself and then getting into designing. So I think that’s kind of how it went. 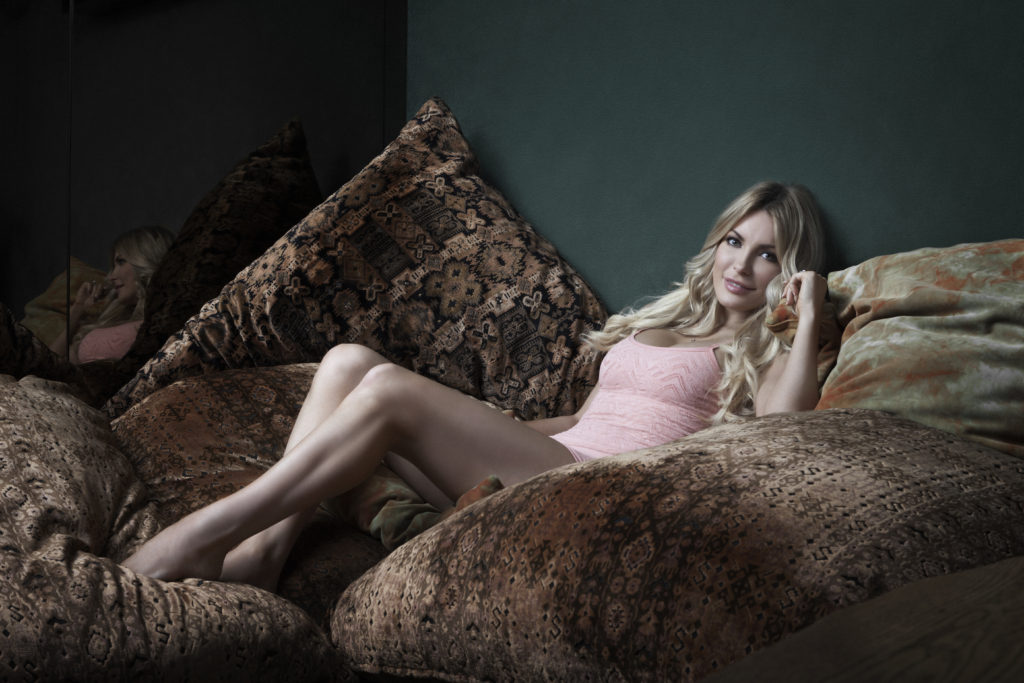 How did you pair up with the Rhonda Shear team?

So Rhonda, she was in Playboy. She used to have a show [she’s a comedian] called Up All Night with Rhonda Shear, and she did a celebrity pictorial in Playboy and it was the same issue that Jenny McCarthy was originally a centerfold, it’s really cool. She’s a friend of the mansion and she does lingerie, so she would always send me stuff from her line. She’s on the shopping network a lot and does really well. She has the Ahh Bra and it’s a number one seller worldwide and I really look up to her, because she was doing acting and modeling, so she’s kind of my inspiration and idol. I asked her if she wanted to collaborate and do a lingerie line, and she wanted to. Her stuff is mostly shape-wear lingerie and I had a lingerie store for a while, then I realized I don’t wear lingerie all that much but what I do wear is the comfortable stuff, which is why I wanted to do something that I personally love. So, we started working together and I gave her all my ideas and designs, and her design team helped me decide what would sell and what would not sell.

When designing the collections did you create it with a specific demographic that you wanted to appeal to or did you design it entirely from your personal preference?

I think it’s younger. Rhonda’s line is kind of geared towards older women. When you go into a loungewear section in a department store it’s more for older ladies, so we’re going to take that and bring it to a younger demographic, which I think will be cool. It’s stuff you can wear anywhere: to the gym, Starbucks, to sleep, wherever.

Can you describe the creative process? Where do you begin?

Where I started was with the idea I wanted to do the loungewear and I knew I definitely wanted to do loungewear, to wear comfortable stuff, because that’s all I wear. We have movie nights four nights a week here, so I’m mostly wearing Uggs, sweaters and comfortable pants and stuff. So that’s where I wanted to start with things that I wear all the time. I took all the stuff I usually wear out of my closet, and we went from there and kind of created new things and looked at all the fabrics. 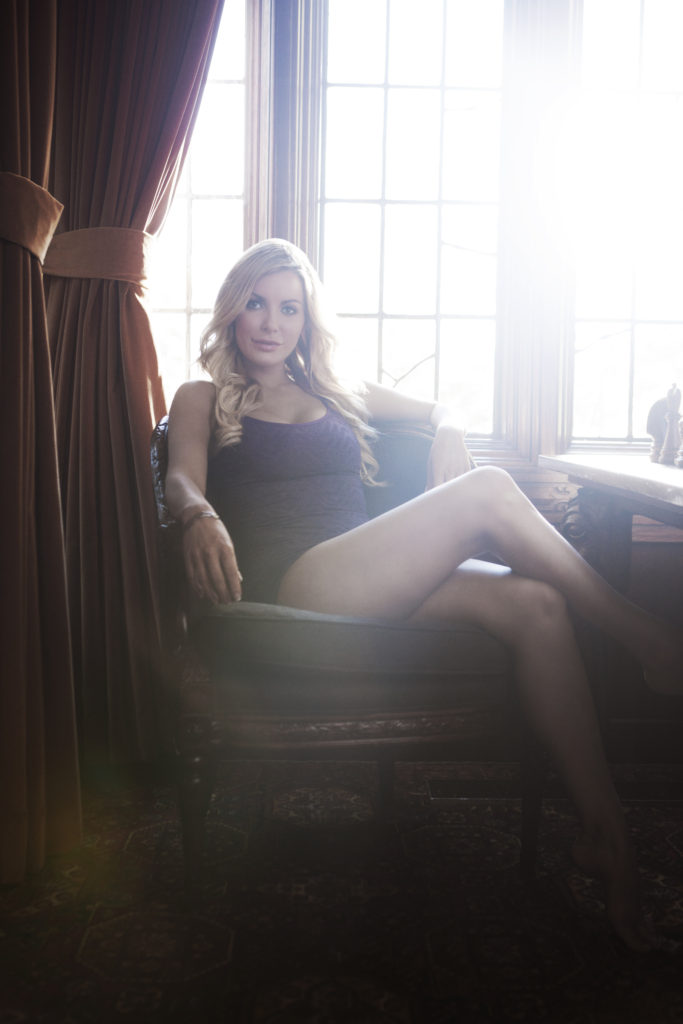 What are your favourite pieces from the collections?

It has to be the ruffle set. It’s the best. It’s shorts, I haven’t seen too many ruffles for adults and it was actually inspired by a little baby underwear we saw with the ruffle butt, but oh my god, that would be so cute for girls a little bit older! We did the ruffle short and when we put it together with the ruffle tank, and oh my gosh, it’s so cute, it looks like one piece all together. So that’s my favourite.

Do you think you would ever take part in designing Playboy merchandise?

Possibly, but Playboy has a lot of licensees in a lot of categories. I have two dogs and they approach me and they’re like “oh we don’t have a licensee for dog clothes, do you wanna do Playboy dog clothes?” and I’m like, maybe eventually but right now I’m just focusing. Maybe. We’ll see. I kinda want to do my own thing.

How would you describe your personal sense of style?

I think it’s very comfortable and relaxed. Most of my stuff is t-shirts, flats… I have some heels, but I don’t wear them all that often. We’re homebodies and mostly just stay here.

I’m sure many are wondering, including myself, do you have a beauty routine that you stick to?

Not really, I try to wear makeup as little as possible. On most days, I don’t wear makeup at all, because when I wear makeup I get breakouts and things like that, so I keep makeup to a minimum. I just started using the La Mer Gel and it’s been really awesome. It’s super hydrating- I love that. I think not wearing makeup as often is what helps me, because you’re also pulling at your skin and rubbing it off, so that’s all I do.
Social media has taken a huge role in communicating with fans. You’re on Vine, YouTube, Instagram, Twitter and have reached an astounding 2.7 million Facebook fans.
I have everything, I’m obsessed! 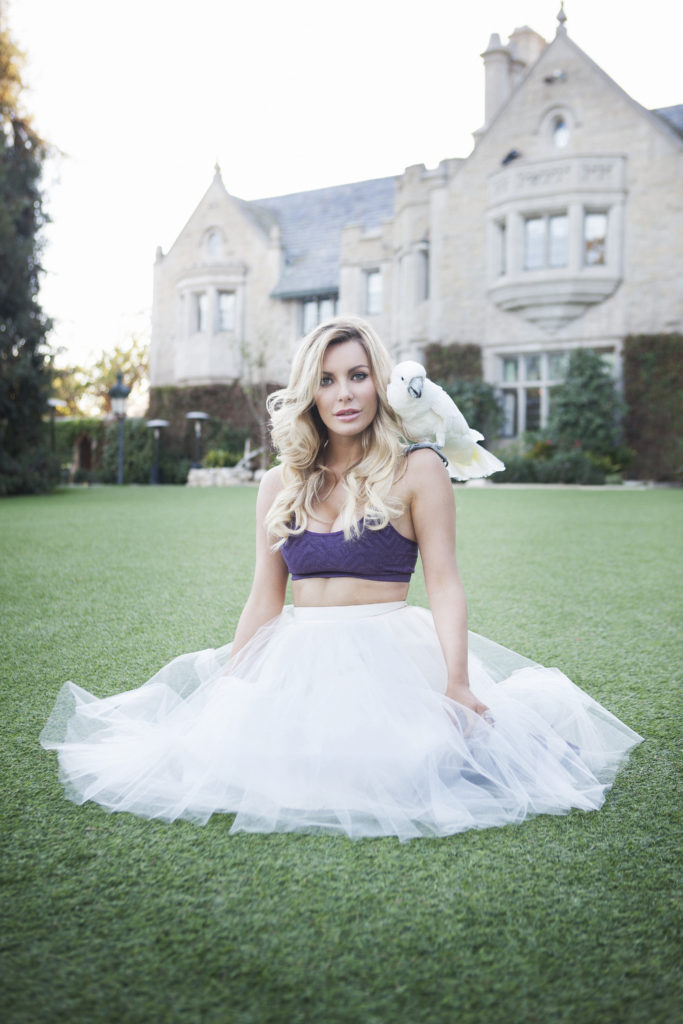 In what ways have these platforms affected you from a personal and business standpoint?

It’s been fun to gain the followers, it’s kind of addicting. I started asking a couple of the Vine kids if they wanted to collaborate, and they are all like, “sure, I’ll come to the mansion!” So, we did some Vines and I met them and some of them are friends now. Instagram is fun. It’s just kind of learning what everyone likes on each platform. It’s going pretty well.

What do you feel is the biggest misconception about you?

When you’re not busy working, how would you describe an average day in your life?

Usually, I wake up and have breakfast. I’ll call down and order food, which I’m very lucky we have a kitchen here with chefs. Then, I’ll usually go to the gym, hang out with the dogs, and catch up on my emails. I always have different stuff going on and started doing different brand deals with social media. It’s been a lot of fun. I’ll catch up on meetings. 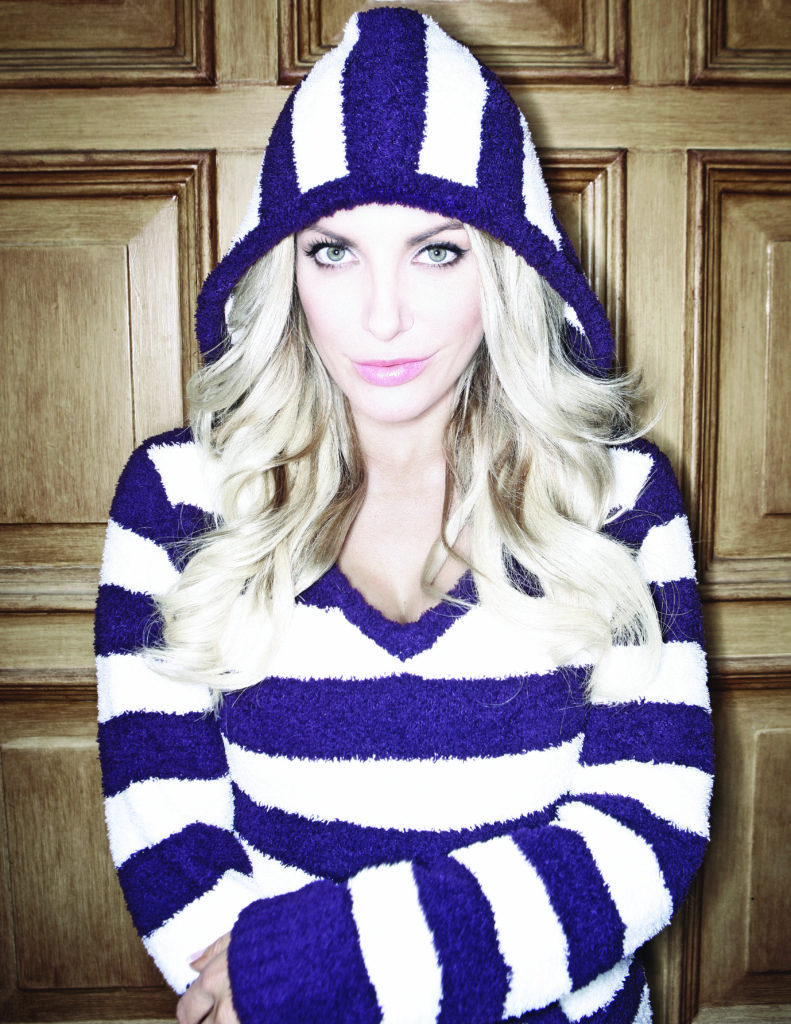 Model, TV personality, DJ and designer- what’s next for you in your future goals?

I think that’s it, there are too many already!

If you could give any words of advice to those who admire and look up to you, what would you say?

I think it would be that if you want to do something, go for it and just have a vision and follow through with it, believe in yourself. Not a lot of people believe in themselves – I didn’t! I never in a million years thought that I would be even coming to the Playboy Mansion once, let alone living here and being married to Hef – it’s been amazing. Just believe in yourself. If you really want something and want to be a part of something then you can. I wanted to DJ and that’s worked out well for me, and I put the practice and time in and it’s been amazing, plus everything with Rhonda and designing. If you want to go for it, do it.