He has hit the Diaphram, the Ears, the Eyes, and now he’s hitting the Tongue

Dan Aykroyd is an iconic Canadian actor, comedian, musician, and philanthropist. He has accomplished so much in his career and creates movies which leave lasting impressions on people from all generations. He is now able to add award-winning adult beverage creator to his impressive list of accomplishments. In my interview with Mr. Aykroyd, I asked him what enticed him to become involved in the adult beverage industry and his answer was too perfect to not quote it in its entirety. “I feel a sense of true accomplishment with this project. I can measure it by past things in my creative and professional life that have worked. On television, I was able to, along with other great collaborators, actors, and writers, deliver an excellent, solicited reaction from the human diaphragm. I caused a lot of laughter there. Then we went on to do record recordings by releasing the Blues Brother’s Brief Case Full of Blues, the soundtrack to the movie, the Made in America record and the best of. I was able to deliver to the consuming public first-class aural stimulation. And then when we went into the motion picture industry where we were able to actually have the facility which manufactures the lachrymose quality in humankind. We drew tears from the eyes. So I have hit the diaphragm, the ears, and the eyes and now I’m hitting the tongue! The vodka lives right up to the quality of my past work and I truly do feel a sense of true accomplishment with it.”

Crystal Head Vodka truly is an impressive adult beverage. The liquid is filtered through 500-million-year-old crystals known as Herkimer diamonds. The water used in the product is the pristine and unspoiled water of Newfoundland, Canada. There are absolutely no additives like glycol, citrus oil or raw sugars, which leaves you with the crystal clear taste of pure vodka. Anthony Dias Blue, who is one of the most influential wine, food and lifestyle personalities in the United States described the taste of Crystal Head as, “Sweet vanilla, dry, crisp with a kick of heat off the finish.” The vodka does not need artificial sweetness because they use peaches and cream in its creation leaving the pallet with an absolutely crisp, clean and delicious tasting Vodka.

I asked Mr. Aykroyd about his inspiration behind the Crystal Head bottle and his answer was simple. “We needed to devise an absolutely crystal clean bottle to put this remarkable product in. So what better vessel than one that is associated with the legend of the 13 Crystal Heads that have been found in regions around the world from the American Southwest to Tibet. The heads are thought to offer spiritual power and enlightenment to those who possess them, and as such stand not as symbols of death, but of life. Positive enlightenment, cleanliness, wellness; you can see the connection to Crystal Head Vodka.” 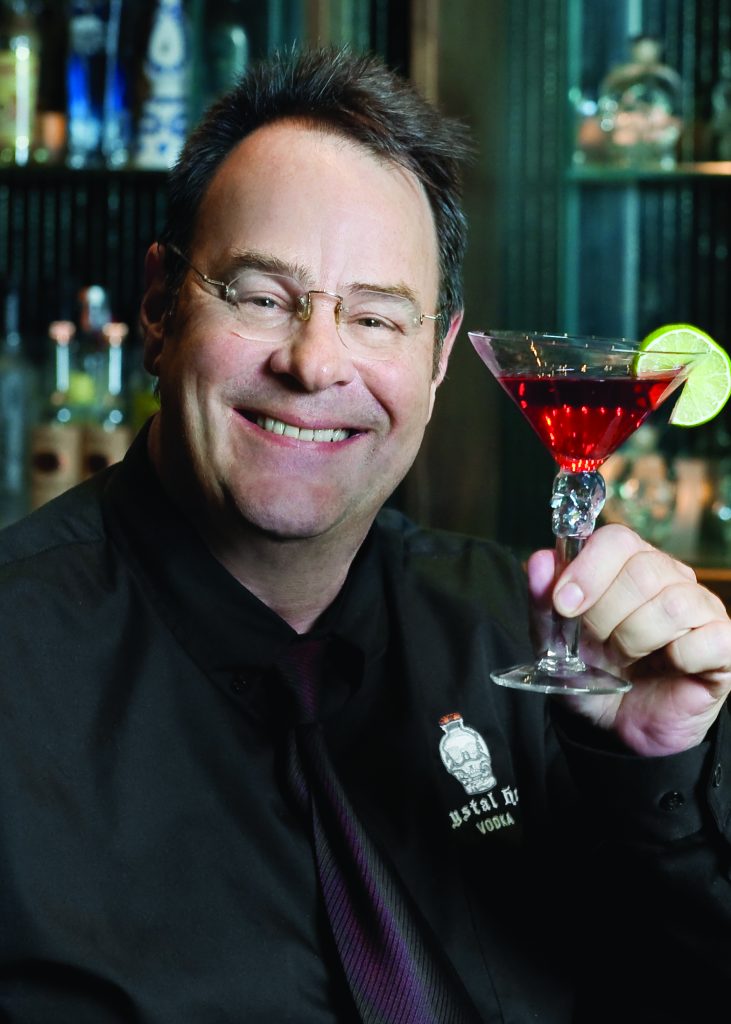 Legend has it that the crystal head skulls were gifted to the tribes from star-children or extraterrestrials, which further explains Mr. Aykroyd’s interest in the legend. Dan has been a long time believer and researcher of the invisible world and has followed his father’s work closely. His father has written a book entitled A History of Ghosts, which chronicles true stories of séances, mediums, ghosts, and Ghostbusters. And now we discover the inspiration behind one of Dan Aykroyd’s wildly popular hits Ghostbusters. He is the originator and writer of both Ghostbusters 1 and 2 and has also written two versions of Ghostbusters 3.

In the meantime, we will be able to enjoy Mr. Aykroyd in the HBO biopic Behind the Candelabra, which stars Michael Douglas as Liberace, a flamboyant entertainer who sought to keep his private life with his much younger male lover out of the public eye. Dan will play Liberace’s manager who did not approve of his gay relationship with lover Scott Thorson (played by Matt Damon). When I asked Mr. Aykroyd about his role in the film he responded in a fantastically flamboyant voice to mimic the likes of Liberace.
“Honey, he loves ya. He really did, he loved his fans [end flamboyant voice]. He was a wonderful entertainer. He did not want to be outed and fought to maintain the fiction of his heterosexual identity right until the very end when he died of AIDS (not necessarily associated with any sexual behavior). He was a great entertainer and lived the life he wanted to live and he was devoted to his fans. Michael Douglas deserves to win an Emmy for this, as does Matt Damon as a love-torn couple.” Mr. Aykroyd plays Seymour Heller, a classic Hollywood manager/agent who represented Liberace for many years. He said that he enjoyed the challenge of playing a character who actually existed and truly appreciated the opportunity to work with award-winning director Steven Soderbergh.

Another recent role for Mr. Aykroyd was his comedic performance in The Campaign alongside Will Ferrell and Zach Galifianakis. “I loved working on this film. Zach Galifianakis is a wonderful and genuine actor. You need to be a great comedian to be a good comedic actor and you need to be a good actor to pull off comedy. And of course, working with the master Will Ferrell. It is great fun to work with these superstars. They treated me respectfully and honored me as a senior member of SNL.”

Many people are aware of the successes of Mr. Aykroyd’s acting career. Megahits like The Blues Brothers, My Girl, The Coneheads, and Ghostbusters span their popularity across several generations and continue to gain popularity to this day. However, what many people may not know is that Mr. Aykroyd is a former reserve commander for the police department in Harahan, Louisiana. He served in the Reserve Commission Core as an Advisory Executive for 15 years. This is one of Dan’s proudest achievements and something that he has used to do so much good especially in the wake of Hurricane Katrina. Mr. Aykroyd was one of the first responders after the devastation and worked tirelessly to assist those who had been affected. He said that it was one of the most exhilarating missions he had ever been on in his whole life.

He also speaks humbly and respectfully of his honor as a member of the Order of Canada. He told me that it was not so much the award as much as it was the company of the people who he dined with at the Governor General’s home that truly humbled him and he will never forget the experience.

As we concluded our interview Mr. Aykroyd was on his way to the United States to begin the celebration of 20 Years of Blues. He is one of the founders of the thirteen live concert music halls which now has locations in Anaheim, Atlantic City, Boston, Chicago and West Hollywood to name a few. He truly is a diverse actor, comedian, restaurant founder and now creator of the award-winning Crystal Head Vodka. It was an honor to interview him for PIE Magazine and we look forward to seeing his future endeavors as his work is always of the finest quality just like his vodka. 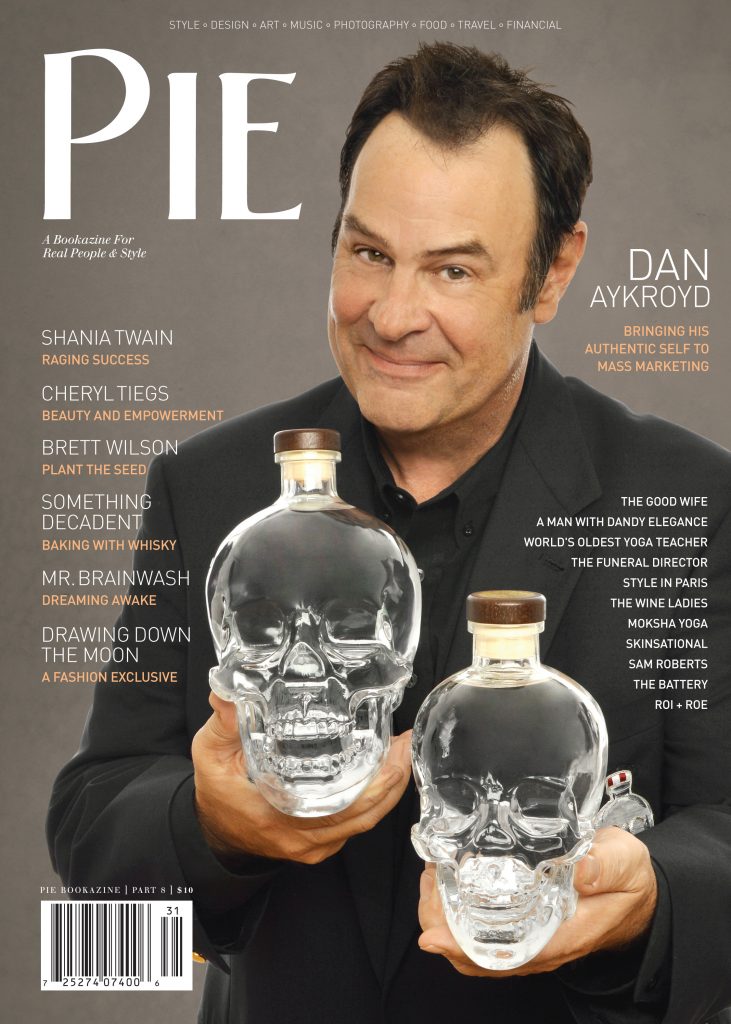